Remains from the Gainsborough family vault were discovered when Friars Street Congregational Church, Sudbury, was knocked down in 1964/65. The bones were removed and reburied in Sudbury Cemetery without ceremony on March 3rd, 1966. The re-interment was carried out by Mr. Noel King, of Harden J. Brown, undertakers, who explained that the human remains found were really unidentifiable and incomplete. It was decided that a memorial to the Gainsborough family was unnecessary as their remains were interred in one grave with a number of other remains taken from other vaults at the Church.

The Trustees of the Sudbury Freemen’s Trust were concerned that these remains lay in an unmarked grave and initiated a project to mark the new resting place for Thomas Gainsborough’s second cousin, her two children and other members of the family which may include his grandparents and parents. In July 1997, the minister at Christ Church United Reformed Church, the Rev. David Bunney, officially dedicated the new memorial stone at a ceremony attended by the Mayor of Sudbury, Geoff Denby.

One hundred years earlier, the Sudbury historian, W.W. Hodson, had noted that the Gainsborough vault was a centre from which the positions of other graves were measured: ‘It is located nine feet from the street palisades, in a direct line to the chapel front, and ought to be marked by a memorial stone with suitable inscription.’ 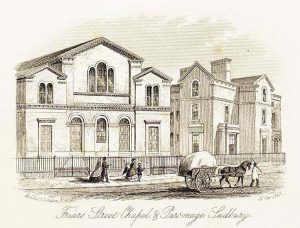 During the demolition of the Friars Street Church, as Anthony Wheeler recalled, ‘No attempt, reprehensible as it now seems, was made to conserve graves and gravestones, (including those of the Gainsborough family), monuments and furnishings, font or even the Great Pulpit Bible. The later, however, was rescued from the ruins; and the font has been found in a Great Waldingfield garden where, firmly fixed, it serves as a bird bath. The organ was rebuilt at Ipswich School. ‘ 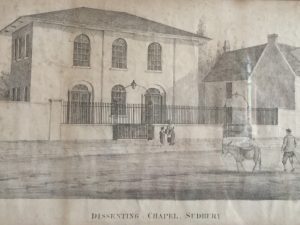 Dissenting Chapel, which replaced an older building in 1823.