Percy Walter Filbee Alston, (known as ‘Pat’),  was born in 1880 in Old Market Place, Sudbury, in an area of the town that came to be dominated by his family. 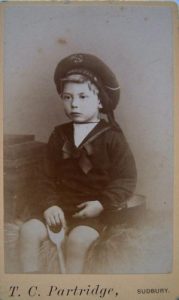 His father, William Alston, although born in Long Melford, had lived in Sudbury nearly all his life. He began a business as a house furnisher and cabinet maker c1860 at 32 King Street, Sudbury, and obtained premises in North Street before acquiring property in Old Market Place where his wife, Fanny Amelia, established a children’s outfitters’ department and drapery shop. William was a town councillor for 12 years and a member of the Court of Guardians. He ensured that Percy had a very good education as he sent him to Sudbury Grammar School.
When Percy left school, he went to work for George Brettell & Co., a wholesale haberdasher in Wood Street, in the city of London, for several years before joining the family business in Sudbury.
Percy and his brother Hammond carried on the house furnishing business. Percy’s wife ran the drapery business at Old Market Place after her mother-in-law died but it continued to trade as ‘F.A. Alston’ for some time before being changed to ‘Poppy Alston’. 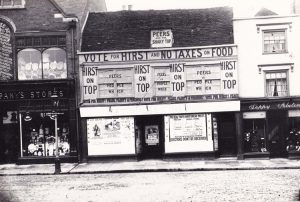 With encouragement from their father, Hammond and Percy both took a great interest in municipal matters. Percy served on the Sudbury Borough Council as councillor, alderman and mayor for 41 years. He was first elected to the council in 1925 and was )mayor during the years 1934 – 35 and 1936 -37 and was honoured with the title of Honorary Freeman of the Borough on his retirement from the council in 1967, when he was 85.
He was a great sportsman and tried his hand at almost anything from skating to yachting and played football for Sudbury Town. He was also a keen member of the Territorial Army, serving with the Honourable Artillery Company. 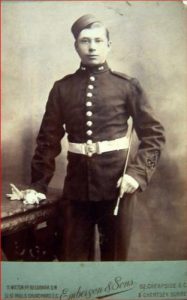 At the time of his death, in April 1969, he was the oldest active business man in the town. He was remembered by many people for acts of personal kindness and generosity.

(Image of Old Market Place from the Historic Photo Archive for Sudbury.)