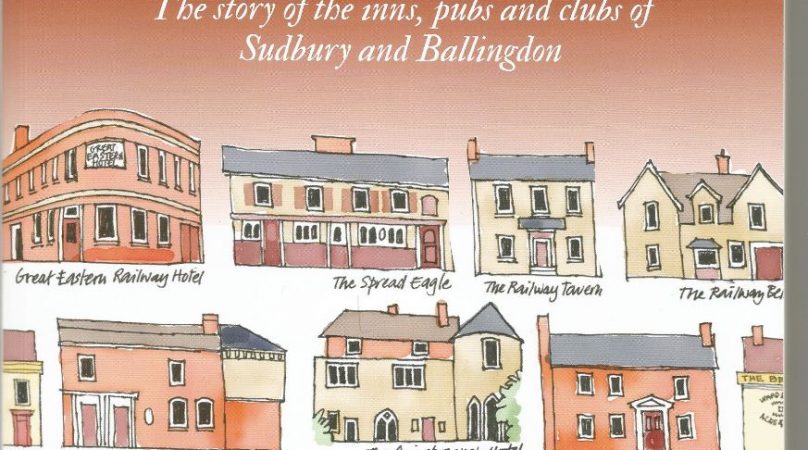 The story of the inns, pubs and clubs of Sudbury and Ballingdon.

Pub crawls are impossible due to Covid but a new book offers a virtual experience. A Pub Crawl through Time delves into the history over two centuries of Sudbury’s pubs, inns and clubs. It is on sale now after delays caused by the pandemic.  ‘It’s been frustrating because I have been working on this book for so long,’ says author Peter Thorogood. ‘Perhaps not the best of times but hopefully it will cheer up those who value pubs whether it’s for their history or as a place to socialise.’

The former publican does his pub crawl alphabetically through 79 inns, pubs, and clubs identifying sites of many who drew their last pint long ago and are now homes and shops. He delves into the history of both survivors and the lost by means of photographs, documentary evidence, lists of previous landlords, his collected anecdotes, and clips from newspapers some dating back to the early 18th century. Along the way there are fires, fights, riots, stage coaching, the story of the famed Pickwick Club – based on Dickens’ novel – and a fake sheik who fooled a village fete.

Peter lives in Sudbury, has written other local history books, and has particular insight into the licensed trade. Before retirement (he is now 75) he spent most of his working life running pubs in and around Sudbury and more recently as manager of the Masonic Hall in North Street. For decades he was chairman of the local Licensed Victuallers’ Association. His advice to casual drinkers at Christmas includes: don’t go to the bar until you know what you want and don’t wave your money or click your fingers for attention – it’s the best way to be ignored.

Andrew Phillips, Lord Phillips of Sudbury, contributes the foreword to the glossy-covered book designed by Robin Drury with Sudbury Freemen’s Trust, Sudbury Museum Trust and the Sudbury Society making a contribution to the cost of publication.  It sells at £14.95.
Nuggets:
The Christopher Inn is said to have been the Gainsborough’s local in the 18th century and a haunt for bikers and Teddy Boys haunt in the 20th when allegations of drug dealing led to closure. It then became the community centre it is today.

Sudbury’s Anti-American Club met in 1780 at the Plough in Stour Street and burned a newspaper they accused of publishing fake news. It is now Salters Hall, a private house on the corner of Plough Lane.

During Sudbury’s 1843 notoriously corrupt parliamentary election, three pillars of the establishment, a lawyer, a surgeon and a tax inspector, were brought before a court. They were accused of being the ringleaders of a riot after 20 men had broken windows of the Bear Hotel in King Street. All three were acquitted after police told the magistrate it was not a riot. The explanation is that the alleged ringleaders were Whigs, the landlord of the Bear was a Tory. Part of the Bear is now the Contented Cow.

The Sudbury Freemen’s Trust provided the seed funding by way of a grant to help with the production and design costs of this book. Copies can be obtained from Peter Thorogood mandpthorogood@gmail.com, telephone 01787 376431 or from ‘Duck in Boots’, Gaol Lane, Sudbury and the Tourist Information Centre at Sudbury Library.