Samuel Crossman was a 17th century writer of sacred verse who was a vicar of All Saints Church, Sudbury and a leader of the Nonconformists in Sudbury simultaneously at a time of great religious, political and military upheaval. Three hundred years after his birth, when ‘The English Hymnal’ was being edited, his poem ‘My song is love unknown’ was set to music by the composer John Ireland. It was to become one of the most popular hymns in the English language.
In the early years of the 17th century, the Stour Valley became notorious as a godly, puritanical area. The Rev. John Wilson, a lecturer in Sudbury, was one of those who had had enough of interference with his teaching and, together with many local Puritans, emigrated to North America. In 1630, he sailed with John Winthrop, of Groton, and founded the church at Charleston.  The great Puritan writer, John Bunyan, often visited his patrons, the Burkitt, family after they moved to Sudbury in 1643. It is said that Bunyan would preach in the kitchen of their house on the corner of Burkitts Lane.
Samuel Crossman came to Sudbury in 1647 at the age of 23. He had studied at Pembroke College, Cambridge, and after graduation had become a minister in the Church of England. It is likely that he was already married to Grace when he came to Sudbury as their son, Samuel, was baptized in September 1647 at All Saints. James was born in 1649 and Benjamin, a year later, in 1650.
Crossman became rector at a church at Little Henny in 1651 but it was in ruins and he did not keep the position for long. In the same year, he also became minister of the ‘separated congregation’ in Sudbury. These nonconformists met sometimes in a barn, in a private house or at All Saints Rectory.
After the restoration of the monarchy, Crossman was ejected from his pulpit in 1662 with the Act of Uniformity which expelled 2,000 Church of England ministers with Puritan sympathies. Three years later, however, he had renounced his Puritan sympathies and had conformed to the teachings of the Church of England. In 1683, shortly before his death, he became Dean of Bristol cathedral. 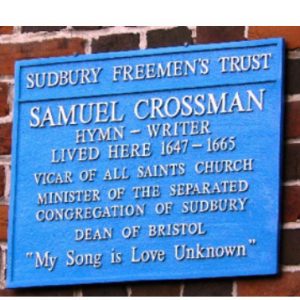