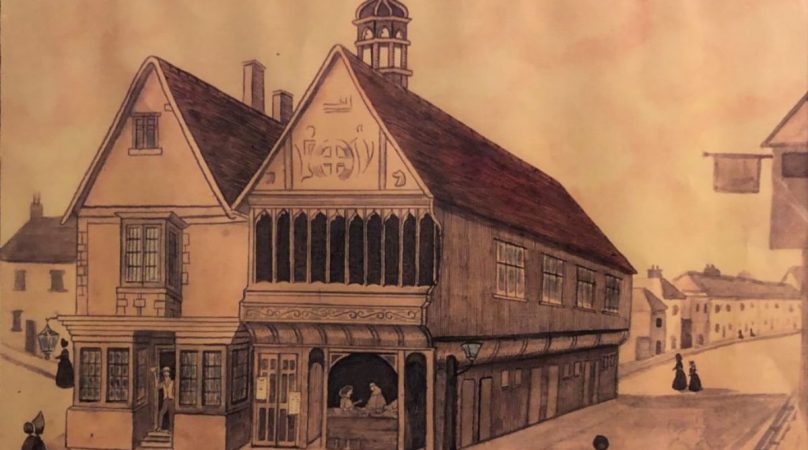 The AGM followed the pay-out of Common Money. Here is a brief summary report – minutes are being prepared by the Clerk, Mr Roy Alston.

The acting Joint-Chairman, Michael E J Wheeler, welcomed the Freemen and Widows who were able to attend. Apologies received will be noted in the minutes.

Updates on all matters discussed at the brief hybrid AGM of 2021 were included in either the annual report or discussions are ongoing. The meeting approved the new format of the AGM occurring at a smaller venue (The Christopher Centre) and the timings used today were also supported.

The meeting noted with respect and regret the deaths of Freemen and Widows listed in the Annual Report.

Mr M Wheeler recommended to the meeting all the work done on our website by Mrs Simonie Prior and Mrs Fiona Wheeler covering the activities of the Sudbury Freemen’s Society and The Sudbury Freemen’s Trust – because of this work the annual report could be much briefer since repetition is unnecessary. Mr Wheeler also recommend the excellent website of the Sudbury Common Lands Charity (SCLC) together with that of the Freemen of England & Wales. He thanked the other three Freemen representative trustees of SCLC for their work and Mr Alan Shelley for his work as vice-President of Freemen of England & Wales.

Mr M Wheeler as Chairman of Sudbury Freemen’s Trust gave a brief update of that charity’s achievements this year and invited questions. Mr Adrian Walters Clerk to the SCLC and Honorary Freeman gave an excellent summary of recent events, adding to the most informative guided walk over part of the Common Lands that afternoon with the Ranger Mr Nick Shimwell. Adrian invited questions.

Mr Barry Hibble, the elected Treasurer of the Sudbury Freemen’s Society, gave a summary of the healthy current position of the Society. Donations of Common Money to the Society have exceeded expenses in recent years leaving a surplus. These reserves of the Society form a ‘legal fund’ for use if the rights of the Freemen of Sudbury are ever under threat. The Meeting noted its thanks to the Treasurer for his diligence and efficiency over many years.

Admissions – while there have been no admissions to The Freedom this year this was due entirely to disruption caused by ‘COVID’. The meeting was made aware of at least five potential new Freemen by descent and urged those families to contact the Sudbury Town Clerk to start the admissions process moving. Mr Malcom Batty gave a brief update on the position of apprentices – all is going well, Sudbury Town Council are happy with the new proposals and Malcolm is to prepare a ‘press release’ which various members present have agreed to promote as best they can. The Meeting recorded thanks to Malcolm for his hard work and noted the successful outcomes of his recent meetings with Sudbury Town Council..

Under ‘any other business’ the Joint Chairman recorded his formal thanks to Mrs Simonie Prior for acting as Joint Chairman and for coordinating the services of our Website advisors ‘FootSteps’ of Colchester; to Adrian Walters and Ross Bentley for permission to include their monthly newsletters; to Mr Nick Shimwell for the guided walk over the Common Lands; to Mr Peter Fulcher the Chairman of SCLC for attending the day’s events; to Mr Roy Alston for acting as Clerk to the Society for many years and, finally, with an eye to domestic harmony to his wife Mrs Fiona Wheeler for her work as Hon Secretary of The Sudbury Freemen’s Trust and webmaster of our site.

Mr Ted Smith (a retired printer) pointed out a typographical date error on the annual report – which has now been corrected on the website. Mr M Wheeler took full responsibility for the error and was grateful that the advancing years had no way dimmed Ted’s professional skills.

The date of the next meetings are: next AGM Tuesday 4th July 2023: next Quinquennial Meeting Tuesday 2nd July 2024. All were urged to consider serving as trustees or committee members and to attempt to interest younger members of their families in serving their Town.

The Meeting ended just before 6pm.