In the early 20th century, whilst Sudbury Grammar School had a long tradition of educating boys, the provision of higher education for girls was still not valued at its full worth in Sudbury. The establishment of the Sudbury Secondary School for Girls, (which later evolved into the Sudbury Girls’ High School), at Hardwicke House was commemorated with a plaque by the Sudbury Freemen’s Trust.
In August 1882 the Suffolk and Essex Free Press reported that a local girl, Miss Alice Mary Poole of 27 Market Hill, Sudbury, appeared in the list of successful candidates in the Cambridge University Higher Local Examinations. It noted that ‘this talented young lady has also been very successful at previous examinations, standing well in the lists.’ Miss Poole continued to do well and obtained a University of Cambridge Secondary Teacher’s Certificate.  In the 1890’s she taught in Scotland and Norfolk before returning to Sudbury in 1899 and establishing the Collegiate School for Girls in North Street. A few years later, the school moved to 17 Friars Street.

As well as educating girls, it had a kindergarten and a preparatory class for boys. The school became very successful and soon needed larger premises. A new home was found at Hardwicke House in Stour Street with large airy rooms and two acres of garden; it offered excellent accommodation for boarders with an ample supply of fruit and vegetables and abundant opportunities for games, gardening and open air life. 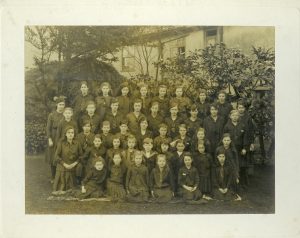 Twenty years after the Collegiate School opened, it was taken over by the County Council as the secondary school for girls in the town and the district.  Miss Poole remained as headmistress for several years but left in October 1923 to help run St. David’s School in Friars Street.  Miss Muir took over for a short period, but it was when Miss M.V. Wilson became head mistress that the school really thrived. A Guide Company, established by Miss Perry, became an important feature of school life.

In 1925 there were over 80 pupils in the school and by 1932 numbers had risen to over 140. The need for more adequate accommodation was expressed on many occasions and in many places. Hardwicke House had been built as a family home and could not accommodate the increased numbers of pupils even when the Schoolroom at Trinity Chapel was hired.  Miss Wilson was passionate about the need for a new and well-equipped building. During the years of the Depression she continued to campaign for a new building and a piece of land was acquired at the top of York Road and the Sudbury Girls’ High School was officially opened in October 1936 with modern spacious buildings.