Plaque erected by the Sudbury Freemen’s Trust at the Site of Sudbury Grammar School, founded 1491 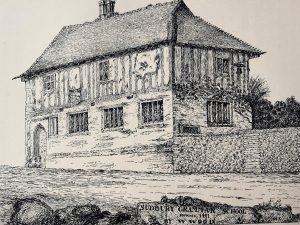 During the 15th century the site now occupied by William Wood House and its grounds was a small farmstead, the boundaries of which seem to have changed little up to the present day. For a time it was occupied by a certain John Hille, whose dwelling almost certainly stood in the important lane (now in part known as School Street), which ran from St. Gregory’s church to the Dominican priory in modern Friars Street. At some stage the property was acquired by William Wood, the scholarly priest who was Warden of Sudbury College, which had been founded by Simon of Sudbury and his brother about 1375. An important figure in the town, Wood was also the rector of the collegiate church of St. Gregory, in the sanctuary of which he asked to be buried when he made his will in April 1491. He also left in trust Hille’s former house and land to provide in perpetuity a school where ‘a worthy and honest man’ should live and teach boys grammar.
Wood died in 1493 and during the next two centuries there are only brief glimpses of his foundation. By 1568 the profits of the land attached to the schoolhouse had been substantially augmented by the rent of a farm at Little Maplestead, the donor of which is unknown. After the Dissolution, the patronage of St. Gregory’s church and its chapel of ease, St. Peter’s, together with that of the grammar school, passed into the hands of successive owners of the former College, not all of whom respected Wood’s wishes. In the early 17th century, six poor scholars regularly received a free education, and ‘with the good liking of the townsmen … very many others have been taught there’. However, by the 1630’s the school was ‘very much decayed’ and only ‘rich men’s sons’ were accepted, owing to the machinations of the unscrupulous patrons, John and Oliver Andrew. Fortunately, the practice of teaching six poor boys was soon resumed and continued until the late 19th century.

About 1700 the schoolhouse was occupied by Alderman Thomas Smith, and later, at a rent of £6 per annum, by Thomas Roberts, a say weaver, ‘he covenanting to keep and leave the glass windows in good repair’. Whether the school was then moribund or carried on elsewhere is not clear, but the Revd. Humphrey Burrough seems subsequently to have taught boys in the original building. Burrough, curate-in-charge of St. Gregory’s, was the uncle of the artist Thomas Gainsborough, and the boy (and probably his brothers) received tuition at the school. According to Gainsborough himself, his picture Cornard Wood ‘was begun before I left school, and was the means of my father’s sending me to London’ in 1740, when only thirteen years of age.
From 1785 until 1817, the Revd. William Finley was the Master, and latterly taught about sixty day pupils and boarders. Like his predecessors, he received the Little Maplestead farm rent as part of his salary, but at his death, the patron, Sir Lachlan Maclean, M.D., claimed the income for himself. Instead of appointing a new Master, he spent £700 rebuilding the old two-storeyed, half-timbered schoolhouse and let it out to the Revd. Simon Young at a nominal rent, on condition that he continued the tradition of teaching six poor scholars. These actions caused considerable local resentment, and in 1830 a lawsuit began which continued for many years, during which, from 1841, the school was closed. Maclean eventually lost the case, and on 26 July 1858 a scheme was approved by the Court of Chancery for the management of a newly constituted Sudbury Grammar School.

Already, in 1857, plans had been drawn up to replace the existing building with the one which now forms the oldest part of William Wood House. The ‘new school room and master’s house’, which cost about £2,500, was designed by a London architect, Robert Philip Pope, and was built by a Long Melford firm. Strict economy had to be practised throughout. Materials from the demolished building were re-used, and one proposed feature, a bell tower ‘to rehang the present bell’, was reluctantly removed from Pope’s original plan.
The new school opened on 1 February 1858, the Master, the Revd. John Cooke, being the sole member of staff. The 26 pupils ranged in age from eight to fourteen and came from both Sudbury and the surrounding villages. 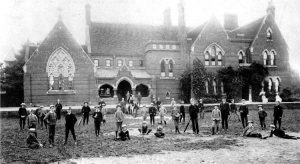 During the next few years it struggled to survive, until in 1880 it was provided with a Board of governors in accordance with the 1878 Education Act. Nevertheless, the 1880’s saw a decline in numbers which was attributed to the prolonged economic depression, but the appointment in 1888 of the enterprising W. G. Normandale proved to be a turning point. In 1895 there were 38 day boys and 24 boarders, the highest roll recorded for almost eighty years.

Normandale’s boarders were drawn from far afield. Testimonials and letters survive from parents living not only in many parts of East Anglia and London, but also from as distant as New York and Pittsburg. One wrote sycophantically to the Headmaster: ‘I am more than pleased to express my entire satisfaction at the progress my son has made under (your) kind care. When he left home he was very delicate, but one year has worked wonders; he looks robust and happy.’

Some old boys have written their own accounts, not necessarily in the same adulatory terms, of living-in. An extant list of items required by a boarder is extremely comprehensive and clearly made considerable financial demands on pupils’ parents, who paid £40 boarding and £10 tuition fees. The boarding house closed in 1932, and the accommodation was little used for the next twenty years. 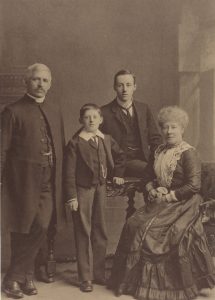