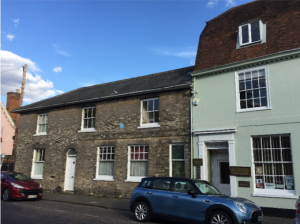 Very few of the people hurrying up and down Friars Street in Sudbury realise that there was a prison on the site of a building next to the offices of Bates, Wells and Braithwaite. Evidence from local newspapers and deeds show that in the 18th and early 19th centuries Friars Street was often called ‘the Gaol Street’.
There is nothing left of the gaol today as it was demolished c1828 when a new Town Hall and Gaol was being planned.  The old bridewell was in a shocking state and although attempts were made to sell the building in 1828, it was eventually torn down with the building material re-used. Another building went up on the site and it was not until the Sudbury Freemen’s Trust arranged for a blue plaque to commemorate the gaol that there was anything to remember over 200 years of prison history in Friars Street.
The Common Gaol was built in the early 17th century and was originally intended ‘ for the safe keeping, punishing and setting to work of rogues, vagabonds, sturdie beggars, idle persons and such as are not able to fynde for themselves habitacions, nor to susteyne themselves and their children, through their owne willfull slothfulness, being stronge of boddie and able to work, and will not’.
It was not just the dishonest and violent Sudburians who spent time in the Gaol but also those who were bankrupt.  Prostitutes and local people who would not conform to the teachings of the Church of England were also likely to be imprisoned. Non-conformists were persecuted heavily between 1662 and 1772 and the Quakers were continually targeted as they insisted on holding their meetings openly whilst other Dissenters met in private houses or barns. Many Quakers were arrested in their houses by the constables of the Town and sent to prison in Bury St. Edmunds when they refused to swear the Oath of Allegiance in front of the Justices. Before being taken to Bury St. Edmunds, it is possible that they spent time either in the Friars Street Gaol or perhaps in the cells in the Old Town Hall. Thomas Kemp, for example, did not survive the ordeal and died in prison on March 26th, 1684. Geoffrey Bullock, who is remembered today by ‘Bullocks Lane’ leading from Friars Street to Meadow Lane, also spent time in Bury St. Edmunds Gaol in 1659 with many other Quakers from Sudbury.
W.W. Hodson, in ‘The Story of the Independents of Sudbury’, described the old Gaol with “its gloomy and forbidding front garnished with festoons of chains and manacles, which clanked ominously as the wind played amongst them, like the irons of the gibbet on Gallows Hill. From a small aperture left in the grated windows of the cells, the prisoners incarcerated for crime or debt or ‘for conscience’ sake, used to beg for a part of their daily sustenance from passers-by. The cells were low and small, bitterly cold, and filthy in the extreme without water or any convenience.’
In December 1776, an inspection of Sudbury Borough Gaol noted that there were no prisoners but, the accommodation ‘Has for Debtors a day-room with a fire-place; and two little rooms for them to lodge in, about seven feet by five each. A room for Men-felons with a fire-place and a loom; another for women; this also has a fire-place. A court-yard, not secure; and the water not accessible to prisoners. They have no allowance. Keeper, no salary.’ A bar of wood across one corner of each room with a little straw on the floor was ‘the necessary’.
Conditions had not improved by the early 19th century and it was not until the new Town Hall and Gaol was built in 1828 under the direction of Mr. Ginn that Sudbury had a prison ‘admirably adapted to the purpose’. Whilst the new gaol was on a small scale for ‘want of ground’, it consisted of four cells, with a yard and governor’s house. The cells had brick floors and in later years became very damp. The gaol was often used as a temporary place of confinement before prisoners were sent to Bury Gaol but inmates in Sudbury no longer had to beg for food from their cell windows. 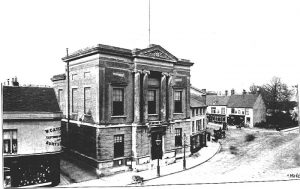