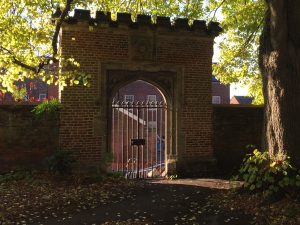 In 1991 the Sudbury Freemen’s Trust arranged for a plaque to be affixed to the Bishop’s Gateway in St. Gregory’s churchyard, Sudbury, to commemorate the founding of a college in 1375 for the training of priests by Simon Theobald and his brother John, and the Bishop of Norwich. The College was built and richly endowed by the two brothers on the site of their parents’ home at the western boundary of St. Gregory’s churchyard. The Theobalds were one of the wealthiest families in the town who not only owned land in Sudbury and the local area but also acquired property in Ipswich and London. Simon became Archbishop of Canterbury in 1375 and the chief minister of the Crown in 1379 but was murdered during the Peasants’ Revolt in 1381.
All that is left above ground of Simon and John’s College today is the Bishop’s Gateway, a stone arch with a Tudor brick surround. The stone shield set above the arch shows the Bishop’s arms with the motif of a Talbot dog. These arms are also incorporated in those of the town. 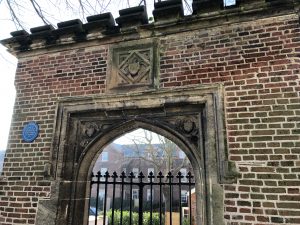 William Wood, Warden of the College between 1467 and 1491 and founder of the Sudbury Grammar School, knew the steps leading up from the College to St. Gregory’s very well. Together with his chaplains, he would have processed from the College to the church every day to sing the divine service in the chancel which Simon of Sudbury had rebuilt.
The College lost its lands and endowments during the dissolution of religious houses in the reign of Henry VIII, and the building passed through a succession of owners until the early 18th century when it became a workhouse with the passing of the 1702 ‘Queen Anne’s Act’ for ‘erecting Hospitals and Workhouses within the Town of Sudbury, for the better employing and maintaining the Poor thereof’. In 1836 the last remains of Simon’s College were pulled down and a new workhouse was built on the site. The Bishop’s Gateway became one of the entrances to the Union Workhouse and was refurbished during the 19th century. 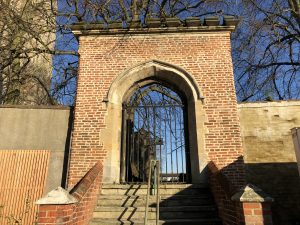 In 1929 the Union Workhouse was taken over by Suffolk County Council and it became a Poor Law Public Assistance Institution before evolving into Walnuttree Hospital, becoming part of the N.H.S. from 1948.  Until recently, before the closure of the Hospital in January 2015 and the conversion into new residential accommodation, it was occasionally possible to tour the old building and view the cellars which were said to be those of Simon’s College. 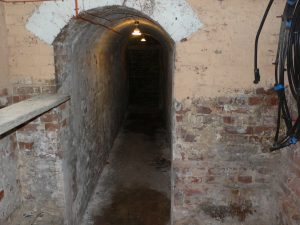