For nearly 200 years, the Gainsborough family in Sudbury were Nonconformists and members of the Independent Church in Sudbury. The first Meeting House was built in Friars Street in 1710, where Thomas Gainsborough’s father worshipped. Most of his brothers and sisters were also baptized in the Meeting House. There was a Gainsborough family pew and a vault which was a centre from which the positions of other graves were measured.
By 1823, the Meeting House had become dilapidated and was too small for the growing congregation and a new chapel was built which could seat 700 people. Less than forty years later, the new chapel had become overcrowded and was felt to be ‘badly shaped and inconvenient’. Under the leadership of the Rev. J. Steer, the Chapel was rebuilt, (with plans designed by an architect, Mr. Barnes), in under four months in the spring and summer of 1859.  Samuel Webb, builder and Freeman of Sudbury, deserved much praise for completing the building in such a short space of time. It was said that on entering the new interior anyone who had seen the old building would imagine that he was in an altogether new chapel. It was an imposing building with 1,140 seats, modern gas lighting, galleries, enlarged classrooms and a new vestry. 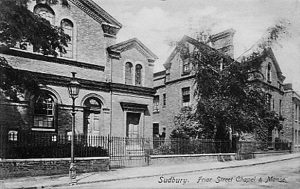 By the mid-20th century the congregation had dwindled to such an extent that the Friars Street Church was only able to have lay pastors in charge. In 1837, a great niece of Thomas Gainsborough, Emily, had led the establishment of a new group of Nonconformists away from the Friars Street Meeting House. A new Church, Trinity Chapel, was built in School Street, Sudbury, in 1838. It became very successful but during the 20th century, seating for two Congregational Churches in a small market town when congregations were falling meant that a difficult decision had to be made as the town could not support two Congregational churches and the Friars Street Church and its site was sold.
Demolition took place in 1964/65 but before the site could be used for any secular purpose it was necessary to remove all human remains and a special exhumation order had to be issued by the Home Secretary, Roy Jenkins, and signed by him. It was thought to be the first time that a mechanical digger had been used for exhumation purposes and the Home Office stipulated that the exhumation should be screened from the public, so hoardings had to be put up. 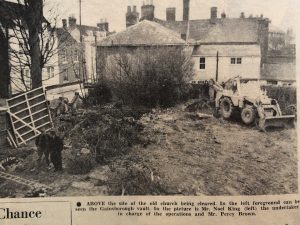 The first vault, (which was nine feet by eight feet and made of well-preserved 18th century brick), had been discovered in 1963 when paving stones between Friars Street and one of the Congregational Church entrances were being removed by workmen. The other vaults were discovered when the Church was demolished. The Gainsborough vault was the last to be opened. Ornate lead nameplates, taken from three of the coffins, which could still be read show that they contained the bodies of Susanna Gainsborough, who died aged 74 on January 12th 1826, and two of her children; Thomas, (not the painter), who died on February 14th, 1844 aged 59, and his sister Emily who died on August 11th, 1855, aged 66.
Other bodies and coffins were also removed from the Gainsborough vault but as most of the coffins were made of wood and in varying stages of deterioration, it was impossible to identify them. One of the earliest coffins was made of lead, possibly containing one of Thomas Gainsborough’s grandparents.
There was a plan to make a carpark on the site of the Congregational Church but, some years after the Social Services office was built, Sudbury Freemen’s Trust arranged for a plaque commemorating the Church to be affixed to the front of the building.