The lost chapel of St. Sepulchre

Gainsborough Street in Sudbury used to be known as Sepulchre Street.  When the name was altered c1898 there must have been many Sudburians who considered it more important to honour the street where Thomas Gainsborough was born, (even though Gainsborough Road already existed), than to remember a chapel with an odd name that had long since disappeared. When place names are altered, local history can be lost and until the Sudbury Freemen’s Trust arranged for a plaque to be placed on a building close to the intersection of Gregory Street and Stour Street, there was nothing to indicate that there was once a beautiful chapel of the Holy Sepulchre surrounded by a grave-yard.
The chapel is said to have been founded by William, Earl of Gloucester in the 12th century, but there is no written evidence of it after 1551 and it was probably pulled down and the materials used for other buildings.
An early 19th century freeman and amateur archaeologist, Abishai James Green, who lived in Sepulchre Street was soon on the trail of the lost chapel. He was a wealthy builder who employed a team of men. Cellars and cesspools sometimes needed to be excavated and, whilst working on various properties in the area of the former chapel, his men began to discover skeletons a few feet below the ground.  After his latest discoveries in 1850, he was inspired to share the news with the wider world and wrote a letter to the editor of the Bury and Norwich Post which was published on April 24th 1850.
Sir, On Thursday last, the 28th inst., as a man in my employ was excavating the soil for a cesspool on the premises of Miss French, in Sepulchre Street, he found the skeleton of a female, lying at full length from east to west about three feet below the surface.  The spot where it was found is very close to where it is supposed the ancient church or chapel dedicated to the Holy Sepulchre once stood, but of which not a vestige now remains. I have not been able to ascertain that any records exist to show that such an edifice ever stood there; but by observations made in 1826, when excavating the cellarage for three houses, for the late Mr. Samuel French, I found eight skeletons, lying also from east to west, inside, as I have every reason to believe, the walls of the building, from having taken up, from under the surface of the lower part of one of the northern buttresses.  The skeletons were about six feet deep below the present level of the road.  It is also well known that on the southern side of the ancient building, within the memory of man, great numbers of human skeletons have been found, particularly on the premises of Mr. James Hassell, where, nearly a century ago, as I am informed by an old man who worked on the spot at the time, so many bones were found that he could only compare it to a charnel house.

Also, about ten or eleven years ago, when the foundations for Trinity Chapel were dug, several skeletons were also found: and at the east end also, more have been taken up by a man now alive. From these circumstances I think there cannot be a doubt that a church or chapel once stood there.  A church dedicated to St. Gregory was standing where the present church of St. Gregory now stands, in the time of Edwin the Saxon, King of England; and it has been supposed that the church or chapel of the Holy Sepulchre, from which the street in which it stood is named as Sepulchre Street, was in a state of decay or ruin when St. Gregory’s was originally built, and that the materials of the old church were used in building the new one.  There seems to be some truth in the supposition, as there never were found, in the memory of man, any materials whatever belonging to the old church, except the part of the buttress found by me.
It has always been supposed that anciently it was the only church then standing in the town as St. Peter’s has not been built seven hundred years; and All Saints, though ancient, is not supposed to be as old as that of St. Peter’s.
If you think these remarks worth a place in your valuable paper, please to insert them, as a few of the many proofs which can be given, as well as the fragments of ancient buildings now standing of the great antiquity of Sudbury.
I am, Sir, yours obediently,
Abishai James Green 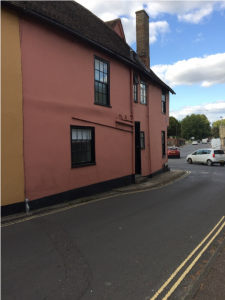