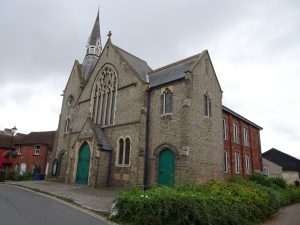 Mr and Mrs Hitchcock were married on November 25th in Sudbury in 1825. The Rev. A Moon related some of the many changes they had seen in their lifetime in connection with the town and the chapel.
Mr Hitchcock remembered the chapel being built in 1838 and the ceiling subsequently falling in. He also remembered the proclamation of peace after the battle of Waterloo, when the town was illuminated with tallow candles placed in the windows, stuck in clay for a candlestick.
The jubilee of King George the Third in 1809, and the coronation of George IV in 1821, William IV in 1831, and of Queen Victoria in 1838, were grand days in the town which he well recollected. On the first two occasions the school children received each a new minted shilling, and there were teas provided in the streets and great rejoicings.
In 1826, Mr. John Wilks, the yellow candidate, gave the children a feast of roast beef and plum pudding, and had the nick-name for doing so of ‘Plum-Pudding Jack’. There was great feasting and a great deal of drunkenness at election times. After the poll was declared the hustings on the hill was pulled down by the inhabitants who carried away the boards. The successful members were ‘chaired’ around the town, amid the ringing of the bells, the music of a band, and the hurrahs of the people. Mr. Hitchcock voted for the first time 53 years ago after the first Reform Bill. 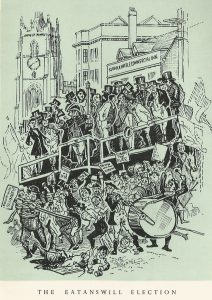 He remembered the old Town Hall on the Market Hill before it was demolished in January 1843.  He also recalled the feasts every July for the children attending St. Peter’s, on the anniversary of the foundation of the Sunday School. In 1814, for example, over 400 children sat down to a dinner of roast beef and plum pudding on the Market Hill, under a canopy tastefully decorated with flowers. When he was a scholar the children were taught in the square pews at the church. 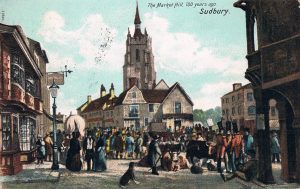 There was a boarding school in Gregory Street kept by Mr. Abraham Daking and another for poorer children kept by Mr. Nathan Webster, and there was also the Grammar School where six boys from All Saints, and six from Ballingdon, were educated free of charge.
After other incidents had been described, Mr. Hitchcock expressed a wish that the lane leading to the chapel from Friars Street might be widened by pulling down part of the abutting house and palisades erected, which would be a great improvement and, open out the Grammar School.