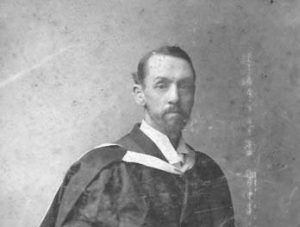 The place-name KIBENTELE commemorates this famous Old Boy of Sudbury Grammar School, probably the only one to have a town named after him. Kibentele is in the Democratic Republic of the Congo, formerly Belgian Congo where, when it was still under Portuguese control, Bentley went, in 1879, as a Baptist missionary.
The son of the Revd. William Bentley, minister of Sudbury Baptist Church, W.H. Bentley was born in the Baptist Manse at Bank Buildings on 30th, October 1855.  A commemorative plaque has been affixed to the house by Sudbury Freemen’s Trust. Bentley, the youngest of four brothers, was educated at Sudbury Grammar School c1864-1867.
A gifted linguist, he read the Hebrew Psalter, and the Greek Testament in the train on his way to work as a bank-clerk, before being accepted by the Baptist Missionary Society for work in the Congo. For this purpose, he learnt Portuguese, and was sufficiently proficient to deliver his first sermon in the language after six months.
Once at the mission field he noted down every Congolese word he heard. In 1887, with the aid of a Congolese assistant, Nlemvo, he published the first Congolese-English dictionary, and he also produced a Grammar of the Congo language and a Congo Primer. These works are said still to be in use.
Bentley spent furlough 1892-93 in Sudbury, where, at the house in Friars Street, now called Bentley House, he completed his translation of the New Testament into Congolese. His literary work also included, in 1895, an appendix of 4,000 words to his Dictionary; a Congolese Hymn Book of 381 hymns, 32 being his own composition; translations of Genesis, Proverbs and Psalms. In 1900 appeared his autobiography, ‘Pioneering on the Congo’.
Bentley recounts a thrilling tale of his many adventures, including encounters with hippopotami and crocodiles. He was one of the first Europeans to reach Stanley Pool, (now known as the Pool Malebo), and later, he travelled as far inland as Stanley Falls, (now known as Boyoma Falls). He explored widely in the Congo, establishing and consolidating mission-stations and schools. He was widely known and respected.
Bentley was a most active and devoted missionary and showed great strength of character yet revealed qualities of great humility and deep spirituality. In 1897 he received a diploma and gold medal for his literary achievements. Glasgow University awarded him a Doctorate in Divinity.
Overcome by the rigours of work and by the tropical climate, Bentley’s health deteriorated. He had already, in his thirties, lost his sight. William Holman Bentley died in December 1905, when on sick leave, then aged only fifty.